Hooray!!! Matt Wieters has a card in 2012 Panini Triple Play

I just got through watching a video box break of  Panini Triple Play by Tracy Hackler and Chris Reed and the first card from the first pack that they show was Matt Weiters. Matt has been missing from the baseball card scene. I only have one card of him from 2008 Razor set. He has appeared on etopps but that is about it. 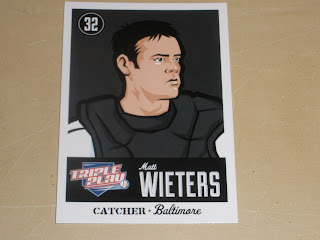