Maybe the most surprising pick is 1983, but it was an improvement over the 1963 set that is was based on. The 1983 set is sort like ‘The Empire Strikes Back” in the first Star Wars Trilogy.  The 1971s were not called Black Beauties for nothing.  The 1991 was most colorful and had the best anniversary logo ever. The 1972 set is Topps at its pinnacle. Its Large in size and Beautiful Looking.  The 1959 set has the kaleidoscope look of paintings.

2018 was the best of the borderless era, its design looked like the Rolling Stones logo.  2012-2014, were decent sets which varied little in design. The 1990 is the craziest looking set and could be called the Purple Passion set

The last 30 years have not been the golden age but it is better than the late 20th century.  1982 set is the worst set  in brown card board back era.  Sorry Night Owl but 2015 is nutty and drab looking.

Tonight on the Masked President it is revealed that Claudia Conway is Donald Trump.

I believe that the biggest surprise of the season of the Masked President will be that Claudia Conway will be revealed as Donald Trump.

This makes those most sense as who else but a 15 year old teen age girl who is on social media all day long, contacted Covid at exactly the same time as President Trump and rides around in cars just to be seen is President Trump.

Posted by John Bateman at 10:25 AM No comments: 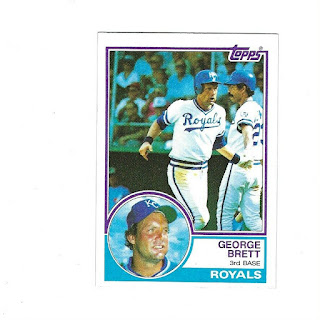 
Posted by John Bateman at 2:55 PM No comments:

The 20 Greatest Sport Card Blogs of all time.

I attempted to do this in a series of post a couple years ago but it did not happen. So lets try again and do it in one post. As I explained back in 2012, I have read the Sports Card Blogroll just about every day (and that is still the case), so I deem myself an expert on the subject.  Let me just say that sports card blogs in 2020 are just not the same as they were in 2012. They are just how could I say, not as fresh as they were back in 2012. There are a number of reasons for that and I will get into few.  The newness of the blogs have just wore off. When I was reading the blogs 8-12 years ago, it was all new. The basic premise was the blogs told me about the cards I owned and presented them in a different light and made them new and fresh again.  The blog 88 Topps Cards, made a junk wax set into one of the most interesting things I ever read and owned.

Also,  I think of the Sports Cards Blogs like Monday Night Football. In the early 1970s, its live nighttime broadcasts with Howard Cosell and the gang  was just must see TV.  However, by the late 1970s and early 1980s the newness and freshness wore off.

In addition, the first time you read about the great action photo on the 1971 Topps Lindy McDaniel it is new but through the years other bloggers will write about it the card and it is just a little less fresh.

There are other reasons, (Twitter, Youtube, Facebook,  Case Breaks, Exclusivity Rights, Trading, Commercialization of) the Sports Card Blogs are not as formidable as years ago.  So that said here we go. Below are the top 20 through 2020 and far below the top 20 through 2012.

12. The Chronicles of Fugi

15. Voice of the Collector – the Anti Beckett

16. A Card Board Problem

The Criteria is Dominance x(times) Durability, with Durability a huge factor, if you been blogging for 12 years straight that helps getting on the list.

Notes:  Night Owl Cards like Howard Cosell is still the GREATEST…..The Topps Archives gives you the undiscovered history of Topps Cards…Wrigley Wax, The Phillies Rooms and Cards on Cards gives you baseball cards from a team perspective…Cardboard History the fastest riser….Some of the Blogs have ended and some have slowed down their pace through the years.

6. The Chronicles of Fuji

15. Voice of the Collector – the Anti Beckett

17. A Card Board Problem

I'm back and ready for a little bit of a predictions.   After studying the US GDP numbers since 1927 and Presidential election results, the following rules tend (83 percent of the time - 19 out of the last 23 elections) to apply:

1. If the (calendar year) GDP rises from the third to fourth year in a Presidential Administration, the political party in power stays in power in the White House. The exception was 1968, where the GDP rose from 2.7 in 1967 to 4.9 in 1968. The Democrats lost the White  House.

Below are the results:


This brings us to 2020. In 2019 the GDP was 2.3. So far the GDP is about -18.0 with a projected -5.0 rate for all of 2020. This tells us there will be a political party change (well at least an 83 percent chance) in the White House. While I don't have the numbers, I remember reading that in a Presidential Year if the Stock Market drops from August 1st to October 31st, the Political Party in the White House will lose the White House.  The last time this did not work was 1980.

With that reasoning that the Political Party in Power now will lose, then this means the stock market from August 1st to October 31st will fall. The Dow Jones is at 26,428. It will be less than that number on October 31st.