Event Worn Jerseys (How to make them better)

There is a great article over at The Sports Card File that got me a thinking. When sports card companies attend photo shots of the top draft picks (usually football and basketball), they have the players wear jerseys and cut them up and put them in cards.

Now I don't know if any card company has ever done this but I would suggest the following: Say Panini brings 50 jerseys to a photo shoot for John Wall to wear. John Wall would put on each jersey, Panini who then would take a picture of him in each jersey. Panini would them cut up the jersey and insert them into cards which would have the actual photo of the jersey which is insert in the card. Thus, Panini on the back of the cards could state "You have recieved a piece of the jersey that John Wall is wearing on the front of the card".

This would be awesome. Collectors could have a piece of a jersey that Wall is wearing or wore and the picture of it is on the front of the card. I personally would love it. Again, I don't know if this has ever been done before. But it should be done.

Here is another example, (though I know it is probably not this simple). But lets says Topps contracts with MLB/and say the Cincinnati Reds to buy all the jerseys worn by the players during a home game in July. Topps could send a photographer out take photos of the players during the game. After the game they collect all the jerseys.  Wa La Topps can then create cards of game used jerseys and state on the back of the card that you are holding a jersey card of Jay Bruce from a game from July xx 2011, and the photo on the front is from that game (thus you are holding a piece of that jersey). If Topps could do something like this these would be super collectable. Again, I don't know if it has ever been done before but it should.
Posted by John Bateman at 1:26 PM 1 comment:

THE BULL. My favorite quote about Greg Luzinski came from Dave Parker. In 1978, when Parker was asked to compare himself to Greg Luzinski Parker said" I am an adonis and he is a pig". Greg may have been a pick but from 1975 to about 1979, he was a great player and was considered a better player than Mike Schmidt. After 1978, both of thier careers took a different turns. 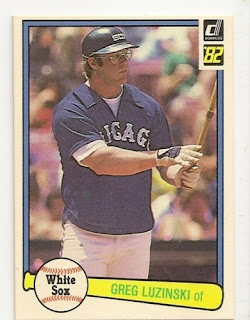 Back Facts: The American League comeback Player of the Year was bought from the Phillies 3/30 for $100,000
Posted by John Bateman at 10:41 AM No comments:

Compare to the 1983 Topps Wade Boggs rookie card that we looked at early this month, it appears that the 1983 Topps Ryne Sandberg is a more recent hotter seller. 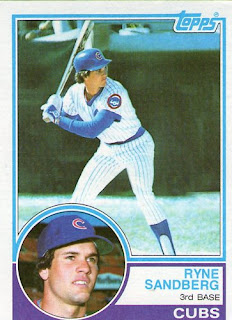 Alan Trammell #5 (the First Baseball card to ever mention a players contract amount?) 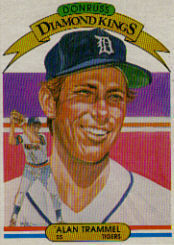 I never realized it before but the 1982 Diamond King cards look a little bit like a fore runner to Topps Allen Ginter sets which would come more than 20 years later. Of course, the Diamond King cards could have been an ode to the 19th century Allen Ginter cards. Even though the Tigers uniform does not stand out on this card it still retains a vibrant look almost 30 years later compared to todays cards.

Back Facts: In 1980 the Tigers signed him to a seven year $2.8 million contract, the longest in the club's history. As I mentioned before I believe the 1982 Donruss set was the first to discuss the contract status of the players on the back of the card (which kind of makes sense since 1981 was the year of the first big strike in Professional Sports).  I believe this card is the first to ever give a contract amount that a player signed for ($2.8 million). Does anyone know of an earlier baseball card that mentions how much money a player signed for. (I think one of the Topps Football cards could have mention Joe Namath's $400,000 contract but I am not sure).
Posted by John Bateman at 2:25 PM No comments:

Sports Card Radio is Hilarious and I love it.

If you ever watch Box Breaks on You Tube check out Sports Card Radio, it is hilarious. I recently watched a 3 video break of 2010 Topps series 2. The guy that rips open the packs is hilarious. He mispronounces half of the players name. And he is not doing it on purposed.  Some of my favorites were Luis Aparicio and Nate McLouth. Another time, he also mistook Alexi Rameriz for Alex Rodriguez. There was about 10 seconds of silence on the tape when he finally realized that Alexi was not Alex.

THE HAWK. The Donruss 1982 set works well with the Montreal Expos uniform. This card is awesome  showing Andre in his vintage Expos uniform with the white ball and yellow bat at the bottom of the page. 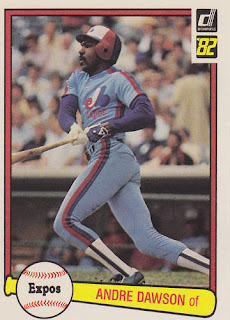 Back Facts: I did not know that Andre's middle name was Fernando.
Posted by John Bateman at 2:06 PM No comments: 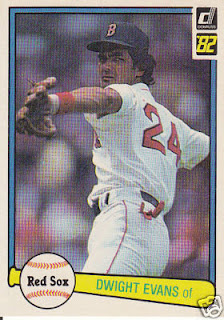 A decent looking photo of Dwight during warmup tosses either before a game or between innings. Some how the 1982 Donruss design does not work with the Red Sox unifroms. Maybe it is the yellow color. This card is interesting because Dwight's gloves appear in is back pocket. Also maybe because of centering his number 24 standouts in this photo.

Dwight was a really really good player but not a great player and he will never be a hall of famer even though he put up some nice stats. But he was never more than the 2 or 3 or 4 cog in those strong offensive Red Sox lineups in the 1970s and 1980s.
Posted by John Bateman at 7:12 PM No comments: 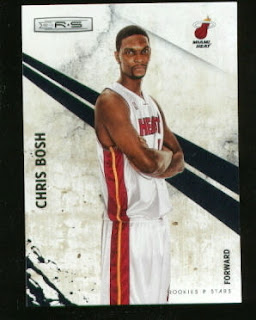 I really like the 2010-11 Rookies and Stars Basketball set. The cards look unusual and almost like a painting of the players (check out the Gerald Wallace card). This card of Bosh almost looks like a painting. I then began to take a closer look at Chris Bosh's face on this card and something looked familiar.

I realize that with the Fu Man Chu beard and the positioning of Chris's eyebrows, Chris's face looks a lot like the 1960s Star Trek Klingons. 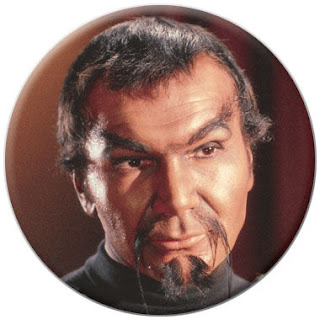 The Klingons from the James T Kirk era or 1960s do not look like the Klingons from Star Trek the Next Generation era or the later Star Trek movies (such as the Undiscovered Country). The reason I heard was that the Klingons look different later on is because the were quickly evolving. Thus they went from above to Worf in about 75 years (or the other reason was because the 1960s Star Trek did not have the budget for elaborate costumes).
Posted by John Bateman at 4:29 PM No comments: 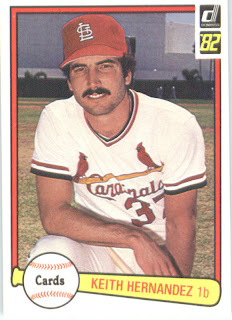 An old fashion posed spring training shot of Keith for his Donruss card in the year the Cards would win the World Series. The grass at this spring training stadium really looks dry and brown. I remember Keith was considered a Super Prospect but his stats and performance was disappointing up to 1979. But in 1979, he had his breakout year at age 26 and shared the MVP with Willie Stargell. I think Keith is a borderline Hall of Famer and if I had to make a decision I would put him in. Between 1977 and 1986, Keith was the Best First Baseman in the National League. If you were the Best at your position for 10 years, you should be in the Hall of Fame. Did you know that Gene Tenace's name was misprounounced all during his career. Most people prounounced his last name "Tennis" but it was really prounounced "Ta-Nach-ee". This is a classic after the swing pose.

Back Facts: Was sidelined himself May 27 when he sprained his left hand diving for a foul pop-up vs. Expos
Posted by John Bateman at 4:23 PM No comments:

Why the Steelers will win the Super Bowl.

The Packers have not been behind by more than 7 points all year. The last team to do that was the 1969 Minnesota Vinkings who lost to the KC Chiefs 23-7 in Super Bowl IV. The 2005 Steelers and the 2007 Giants were the first teams to win 3 road games in the playoffs and win the Super Bowl. It is not happening 3 times in 6 years.

That is 17 wins for a team that won the Super Bowl in the last 4 years against 6 losses. What is worrisome for the Steelers is in the last 8 occurrances the prior SB winner is only 4 and 4.  (Incredibly only Super Bowl 13 was the only time 2 teams met who  had won the SB in previous 4 years).
Posted by John Bateman at 6:35 PM No comments: 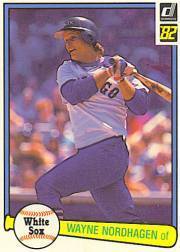 This is a pretty nondescript card of Wayne in the follow through of an a bat. He is wearing a classic White Sox uniform. Wayne was involved in some strange dealings in 1982. In June of 1982 he was traded by the Blue Jays to the Pirates (In April the White Sox traded him to Blue Jays). He played one game with the Pirates and I happened to have attended that game. He went to 2 for 4 with 2 Rbis. He never played another game with the Pirates as he was traded back to the Blue Jays a few days later. A Strange Odyssey.
Posted by John Bateman at 7:50 PM No comments: 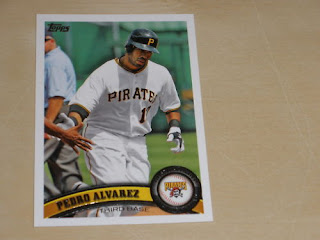 Pedro Alvarez who was mysteriously absent from 2010 Topps update and highlights set makes an appearence in series 1 of 2011 Topps Baseball. Pedro's card does not have the rookie card logo on it. The only card of Pedro that has the rookie card logo is his etopps cards. Does that count as a rookie card? Also, again there is no appearance of Matt Wieters. Matt who has a couple of cards with rookie card logos in a few 2009 Upper Deck sets has never made an appearance on any Topps sets except for a etopps card in 2009. Again, does etopps count for anything?
Posted by John Bateman at 6:25 PM 1 comment: