Captain America, The Wizard of Oz, Barry Bonds and Steroids 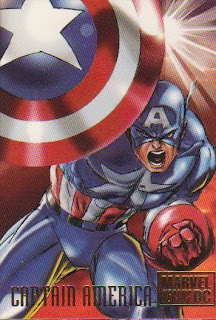 In 1941, Timely Comics (well, I think it was called Timely but I know for sure that it was not Marvel) created a character called Captain America. We all know him as Cap with his sidekick Bucky (Cap's Robin - why at this time did all super heroes have to have young boys as there side kick - this is for some other blog to speculate). One thing that I remember about Cap was how he became a super hero. He took the Super Strength Serum. (i.e. Steroids?- this may have been basically what it was). I noticed in the previews for the New Captain America Movie,  they put a scrawny Steve Rogers in some sort of hyper chamber and out pops C. America with his new physique. (I guess the steroids question is going to get played down in this movie). But the moral of the story is the original Captain America was created by a steroids like substance.

In the 1939 movie, the Wizard of Oz, during the part of the movie just before the tornado hits, Dorothy meets the Carnival Wagon Man (i.e. the soon to be Wizard - I can't remember his pre Wizard name). If you take a good look at his Wagon, there is a large advertisement on the side for a Super Strength Formula. Would this formula have been a steroid like substance?. Probably. The moral of the story is Man has been looking for ways to get bigger, stronger, faster, healthier for years.

Barry Bonds is not on trial for using steroids but for lying to the government under oath. If what Jason Giambi testified to the other day is correct (he stated Bonds trainer told him to this extent  "what I have given you was similar to steroids but were not steroids"), I don't see how the government can win this case. If Bonds says Anderson gave him something similar to steroids but were not steroids, how can Bonds be disputed.  Bonds is not a doctor, Bonds did not test what he took. Was Bonds taking something because he thought it would make him bigger and stronger, Heck Yeah. What Bonds thought and what Bonds knows are 2 different things. The moral of the story is what you know and what you think are 2 different things.

In 1994, Baseball began using a new baseball. In 1993, the offensive statistics began to surge because of expansion and Colorado Rockies, the stats increased after 1993 not entirely because of steroids in the game but because of the baseball (and new stadiums). If Steroids caused players stats to surge why did those not linked to steroids stats increase. Players like Jeff Bagwell, Craig Biggio, Steve Finley, Luis Gonzalez, Frank Thomas, Ken Griffey all had better stats in the late 1990s than the early 1990s. Even Cal Ripken saw a slight spike in his offense. The SF Giants trainer testified that Bonds's hat sized increased but he also testified that Willie Mays and Willie McCovey's hat sized increased also (though after they retired). The moral of the story is just because someone's head got bigger does not mean it was because of steroids.
Posted by John Bateman at 6:18 PM 1 comment:

Rickey Henderson is consider the best lead off man of all time but from 1981 to 1987 when Henderson was at his peak, Mr. Raines stacks up very evenly. The idea in baseball is to get on base, get around the bases and score runs. Using simple stats and creating a new one (bases accumulated), Raines is in a dead heap with Henderson during this time frame.

From 1981-1987, Raines accumulated more bases than Henderson. Henderson holds a slight edge in runs score (780-719). Based on this 7 year period, I think Raines should be in the Hall of Fame. 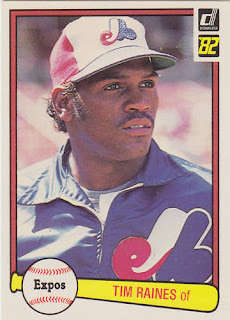 This card is a nice shot of Raines and the awesome Expos logo, though this card does not stack up to Raines's 1981 Donruss rookie card.
Posted by John Bateman at 6:19 PM 2 comments:

Ken Brett is on of the greatest hitting pitchers of all time. Here is a nice smiling shot of Ken wearing a Royals arm up jacket.This photo I believe as taken at the same time as a few other Royals in the set. 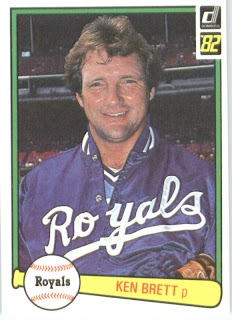 Back Facts: An excellent hitting pitcher before the DH rule, he holds the major league record for most consecutive games hitting a home run by a pitcher
Posted by John Bateman at 5:42 AM No comments:

I remember in the early 1970s, in the winter time, on Friday nights, it always seemed like the California Golden Seals were usually playing and they were probably at home. I have not checked the internet to determine if it is true. This is from my memory. It was a different time, when you did not have the internet and only 3 TV channels.

What I remember was the on Friday nights in the early 1970s the Golden Seals were not only the only game in town but the only game in North America. Living 3000 miles away, I used to imagine what was or would be happening at the game (since they did not start until later East Coast Time.). 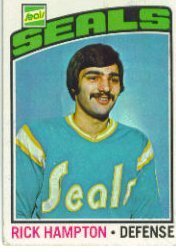 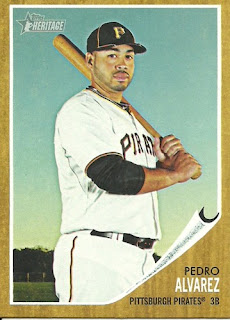 While Bruce sold the sets very cheaply, I think I paid 12.95 or 14.95 for them, he packaged them cheaply.  I did not really mind but my 1974-75 card number 1 Kareem Abdul Jabbar was kind of damaged. Bruce would rubber bands the cards together usually in sets of 66 cards and send them in brown/beige paper wrappers. All the cards came mint condition and the only cards that had any effect of rubber bands were the first and 66th card in the rubber band set. The Jabbar card was the only card I could recall that took a pounding in the shipping process. However, for the price, I loved the cards and I loved Bruce Yeko for keeping them and selling them to me. 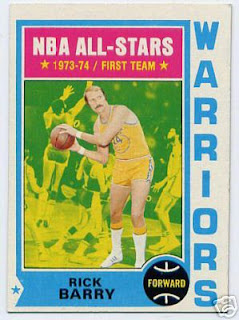 Posted by John Bateman at 6:29 PM No comments:

Thats right that is what Bert's full name. Bert's name is so long on the back of his card that it almost interfers with the card number. In fact I noticed on this card that the number 593 is a little larger than other numbers on the back in my 1982 Donruss set. I don't think it is an error, it just has to do with the type of of his long name. Also, I notice that his home is Raytown, Mo. I guess he never left the Kansas City area even though the A's did in the late 1960. 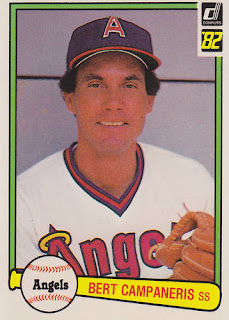 I always thought that Frank Robinson was a notch or two below Willie Mays and Hank Aaron. He was just not as good as those two. I never thought of him as a contemporary of  Mickey Mantle even though Mantle was only 4 years older. I guess the player I always compared Frank to was Harmon Killebrew. I guess because they finished so close together in there final HR numbers. I always thought Frank was better than Harmon. 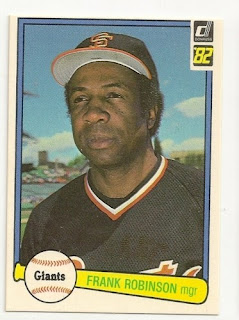 This card shows a nice partly cloudy blue ski spring training day probably from 1981. This is a posed shot with Frank looking to his right. Back Facts: He was the first black man to be hired as a big league manager - by the Indians in '75.
Posted by John Bateman at 5:37 AM No comments: 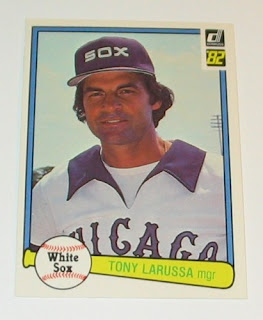 A youthful looking Larussa in this photo, he was about 37 years old at the time and he already had 3 years in as White Sox Manager.

Back Facts: "One claim to fame he has not yet had to share is the fact that he is the only manager in baseball with a law degree having passed the Florida Bar in 1980.

There is of course a famous true tv video of his drunken traffic stop a few years ago (either before the 2007 or 2008 season), which confirms that Tony does not pass the Bar.
Posted by John Bateman at 7:47 PM No comments: 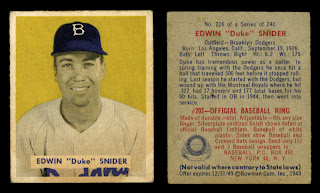 With the advent of price guides in the early 1980s, the Mantle card took off and blew out the Mays and Snider rookie cards. The last time Mays rookie was a least 20 percent of Mantles was in 1985. Another interesting item was the stagnate price of all three cards from 1996 to 2005 but then how the listed price of the Mantle rookie took off again between 2005 and 2009.
Posted by John Bateman at 1:05 PM No comments: 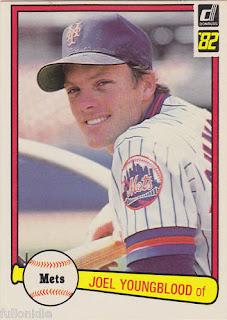 This is a really nice over the shoulder card shot of Joel. Joel is giving the camera man a nice big smile. There is also great shot of the Mets logo on his left shoulder.
Back Stats: ﻿Mets got him 6/15/77 from Cardinals for SS Mike Phillips.
I always though Youngblood came to the Mets in the Seaver trade.  Youngblood was also the name of a bad 1980s movie that I think starred Charlie Sheen's brother.
Posted by John Bateman at 5:54 PM No comments:

An interesting pose of Clark with the baseball bat on his left shoulder. It does not appear to be a posed shot because it appears that Clark has his mouth open and could be talking to someone. Of course I could be wrong. The name of the bat manufactuer or bat begins with an A and it appear to be Adirondack. Yes,
that is what it says Adirondack. 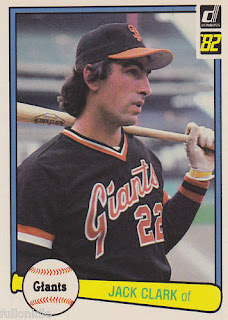 Back Stats: Broke a 48 year Giant record by hitting safely in 26 straight games in '78.
Posted by John Bateman at 6:25 PM No comments: 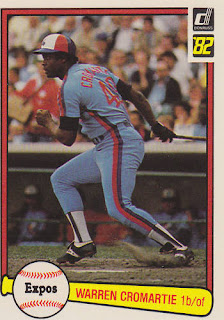 Just an awesome card from the set. As I mentioned before (when commenting on Andre Dawson), the Expos unifrom goes great with the yellow bat name at the bottom of the card. What makes this card great is the Expos in the dugout in the background. Also, probably greatest thing about this card is his left foot, look hoiw this card captures the dirt flying of the ground as Warren turns towards first base. The flying dirt is a very subtle action shot that even today is rarely captured on cards.

Back Facts; Middle name is Livingston
Posted by John Bateman at 5:47 PM No comments: