Puberty Highlight: The day I found out Sigourney Weaver was not a man

There is a movie out now that is a prequel to the Alien Flics of years gone by. This makes me recall my Puberty moment. I went to see the original Alien movie when it first came out in the late 1970s at the dawn of my teenage years. The movie had 7 space explorers that were getting picked off one by one on a dreary starship by an Alien monster. Watching the movie from the beginning, I thought there was only one female on the starship and it was towards the end of the movie as people were getting picked off there actually was another female on board and I wondered where she  had came from. I guess, I thought she was a man earlier in the movie. I just did not notice her.  I ended up getting my puberty moment at the end of the movie from her though. Towards the  end of the movie, Sigourney goes to a space pod and begins to disrobe to put on a space suit. In the pod she began stripping down to her panties and a tee - shirt that left little to the imagination. Then it hit me. Wow! Holy Cow! Whamo! She is not a man. It was my first big suprise going to the movies (later to be topped by Luke, I am your father). All I could think about was I never noticed her before in this movie. She went from a man  to Sprung,  Thumbs Up all in one film. 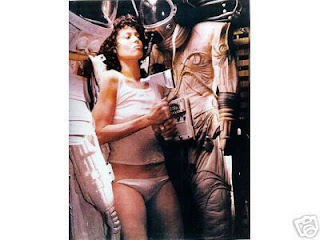 I went to see that Movie a second time (of course that movie was rated R and I did not go with an adult, so don't tell anybody) a few weeks later just to better prepare myself for that ending. It was my first teenage highlight.
Posted by John Bateman at 3:56 PM