The M&M boys who were the Yankee stars between the Yankee Championship runs. I love Mattingly (and his baseball cards) and still get a tingle when I think about those 3 fantastic years he had between 1984 and 1986. However, I also love Bobby Murcer and feel he is a very underrated player who played at a time when hitting 32 Home Runs would lead the league. 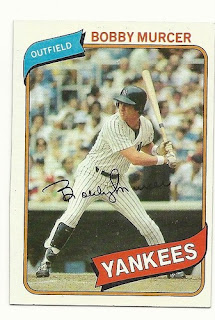