If you would compare Madlock's 1982 Donruss card with his 1982 Topps and Fleer cards, you would see that something is missing. On his Donruss 1982 card Mad Dog has, at least to my count, 8 stars showing up on his batting cap. On his Topps and Fleer cards there are no stars (which were given out by Willie STARgell) on his cap. He also appears on a batting leader card in Topps set with a cap on but with no stars. I am guessing that the photo on the 1982 Donruss card was taken in 1979 or 1980. I don't think Willie Stargell gave out stars to players in 1981. 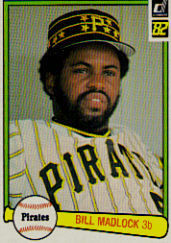 Back Facts: signed a 6 year contract with Pirates that contained a unique weight clause.
Posted by John Bateman at 10:16 AM