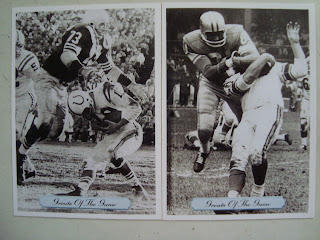 The card on the right is a 1991 AW card of Dick "Night Train" Lane.
This card is probably the most visually violent card that I have ever seen. It looks like Lane is trying to take the head off of the receiver on this card. This action play shot probably from the late 1950s and probably did not result in a penalty. This card just hurts. I feel for the receiver.

The other card is not visually as violent but what came after the photo probably hurts as well. It looks like Leo Nomelli is about to fold Johnny Unitas in half. This action shot (also AW) holds it own against any card produced in the last 20 years or so.

AW the manufacture of the set, I think produced only one set in 1991, most were of current players I believe but there also contained alot of retired superstars. This was one of the first sets to do this. As you know now this is standard fair for Baseball Cards now.
Posted by John Bateman at 4:01 PM