ARE YOU READY FOR SOME score FOOTBALL 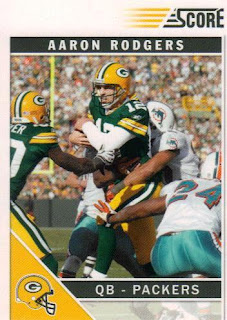 Welp, the NFL season opens tomorrow night in Green Bay. The 2011 Football card season opened up in early July with the release of Score football. There has been a Score Football set put out every year since 1989. Who would have thought in the early 1990s that Score Football would outlast Upper Deck football, baseball and basketball; Fleer football, baseball and basketball; Donruss baseball; Score Baseball; Topps basketball and hockey. 23 consecutive seasons and counting (it even outlast Brett Farve)

This card is one of the finer photos from the set. Score football gives you that early 1990s non glossy, cheap price feeling. However,  the card stock is A+. The card stock is a better quality than Topps baseball, football and Bowman baseball at almost half the price.

For the true sportscard collector there is no finer of a set.
Posted by John Bateman at 4:13 PM