The Iconic Series: 1979 Topps George Brett or How Donruss loved this card so much they remade it in 1982 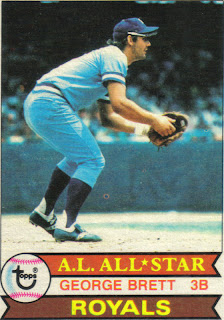 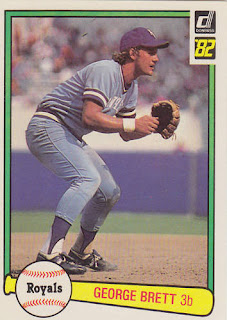 I think it is this card. It is an odd angled photo showing Brett crouching at third base, just a wonder action shot for a late 1970s card. It also has that wonderful ALL-STAR banner that I wish Topps would bring back running along near the bottom of the card just above his name. In 1979, George was emerging as a dominant player as he had a great statistical year.
Also, this was the first single card I ever bought through the mail to help complete my baseball set back in 1979.
Also for Donruss in 1982, they loved this card so much that they remade it. There are few little things that are different as George has both feet on the ground and he is holding his glove up higher but it is almost like seeing double.
Posted by John Bateman at 4:03 PM