The Television Event of the 1970s - Big Foot vs. The Six Million Dollar Man

The confrontation came over a year before Darth Vader and Obi Wan would square off on the Death Star. It was Andre the Giant who played Big Foot in these two back to back episodes (Feb 8). This was probably the peak for the Six Million Dollar Man as it would go off the air in a little over 2 years late. Only lasting 5 seasons. 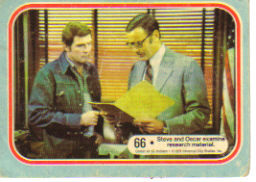 Just like Big Foot, I don't think there is a card or sticker that was able to caputre a photo of the creature.
Posted by John Bateman at 4:23 PM