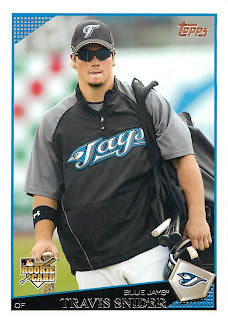 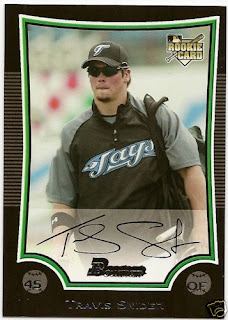 With the Pirates acquiring Travis Snider, it caused me to recall his 2009 Topps rookie card (and Bowman). Travis was the youngest rookie to apear in the Series 1 set that year. He came up in late 2008, his rookie card did not get in the late 2008 sets. Remember 2008 was the same year Longoria and Jay Bruce made their major league debut. Snider was the early hot rookie in the 2009 set but quickly fizzled  out. But his cards did make him look like one big bad tough dude. (according to his rookie card he was 5'11 and 240lbs.) He looks more like someone from the WWE than the MLB.
Posted by John Bateman at 6:06 PM