Not John Houseman the old actor who did the Smith Barney commericials but the good old pitcher who pitched for some crummy Met teams in the late 1970s and early 1980s. Hausman is a medicore middle reliever who did not pitch a full season with a team that won more than 70 games in his career from 1975 to 1982. In 1982, in September, Hausman was traded to (America's Team) the Atlanta Braves and pitched 3 games for the Braves who would make the playoffs. The Braves went 10-11 after acquiring him.  I don't think he was included on their playoff roster. He never pitched in the majors again. 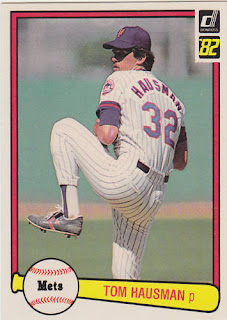 Photo Front: This is a classic shot of him in his windup with a high leg kick.
Posted by John Bateman at 7:53 PM