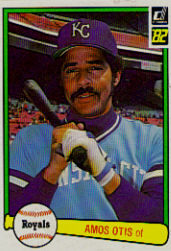 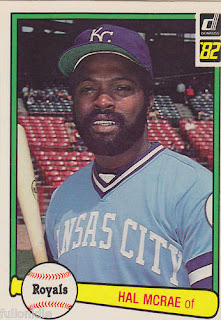 I love cards that I can find some sort of similarity to each other. In the Donruss 1982 set 2 Royal cards are very similar. Amos Otis and Hal McRae photos were taken at almost the same time and at the nearly the same angle. The McRae card was taken at a lower angle but you can see the blue and red seats in the back ground. I am not sure what stadium this is. The Otis card show the same red and blue seats but the angle is focused upward and show the upper deck of the stadium in the back ground. The cards have a greater effect when you put them side by side.

Back Facts: Otis - began his card as a shortstop and also played a little third base for the Mets. McRae - A real "gamer" who comes to beat you.
Posted by John Bateman at 3:44 PM