Major League Baseball institutes the rookie card logo rules and the shrinks the number of baseball card manufactures to 2. For the first time a major sports league tries to influence the card manufactures and create rules for rookie cards (the cards drive the hobby). Well I can say it was not really a great success as Bowman was still allowed to print cards of players who were not in the majors. It was at least some attempt to try to standardize the rules. The rookie logo cards would have more meaning if less sets were made but everything can't be perfect. 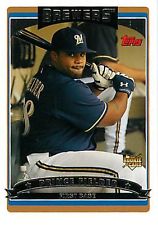 Just missing the cut: 1986 - Fleer brings back NBA cards after a 5 year hiatus. While the set and cards are not worth as much as they were 20 years ago. It is a distinct set and help propel Michael Jordan to an industry legend. But this series is more about the cards themselves and not how much they would become in value.
Posted by John Bateman at 4:20 PM