Through 6 games of the 1980 football season Paul Hofer was leading the league in receiving and was on pace to catch over 100 passes. He was also one of the top rushing leaders in the NFL. However, during that 6th game he hurt his knee and was never the same player again. He probably did benefit from Bill Walsh's new West Coast offense lead by first year starter Joe Montana.

I vaguely remember a mention about Hofer's rookie card in The Sporting News. It was most sought after. Sort of like before the 1981 Fleer Fernando Valenuezala rookie card (which got a mention in SI back in 1981). 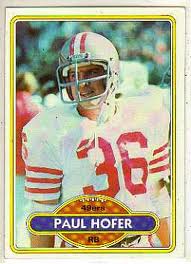 I remember buying a lot of 1980 Topps football back then but I could not get this card. A few people in the neighborhood did not have it either. I still look upon this card fondly. I had never heard of him before but it was cool there was a rookie football card of him (but I could not get it).   The card looks kind of cool too with the white 49er uniform.
Posted by John Bateman at 3:57 PM