This shows the Oakland A's uniform in all its glory. Beginning in the early 1970s they A''s had some great teams and great uniforms. I believe Mike Norris had some drug problems throughout his career and life. A quick look at his face in this photo and I would not be surprised he was on drugs when this was taken.

Back Facts: Lost out in Cy Young balloting to Steve Stone, partly because three writers left him off their ballots. 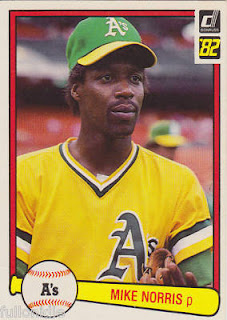