The first mystery is personal. I used to collect cards by the pack in the late 1970s. I was never able to put together a complete set but I was always close. I remember I never got a 1977 Topps Dave Parker and finally saw his card for the first time when in the late 1980s, I began buying mint complete sets to replace the collections I had. For a while there I did not think Topps was making Jerry Koosman cards. I know for a fact I never got his card in the 1978 set or the 1980 set (through buying packs) and maybe even the 1979 set -even though I had probably had those sets complete to about 98% when they first came out. I did not see these cards until years later when I upgraded my sets. 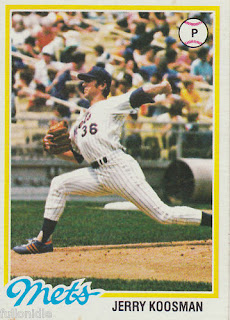 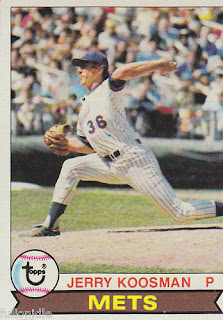 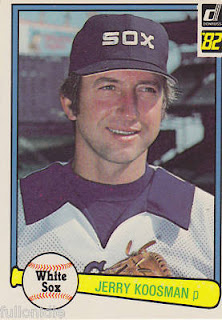 But one thing I never noticed was how similar his 1978 and 1979 cards looked. However, after much examination of the two cards, I think I can be safe to assume they are not from the same game. The fans in the stands are different and the positioning of the rule tarp is different. Plus his blue under shirt sleeve seems to be longer on the 1978 card.

His Donruss 1982 card was a classic head shot. Jerry had some incredible swings in W-L record in his career.