I saw a picture of Tony Perez’s Topps lineage card on Night Owl’s blog and realized that I saw this photo/card before or a slight variation of it. Compare the two, the Lineage card photo was taken seconds or minutes after or before the photo that appears on Tony Perez’s 1969 Topps card. You see the overhang of the upper deck (Crosley Field?) on both cards, though it is barely seen on the lineage card. Both have the batting cage in the background and the wheel for the photo is in the same exact position on both cards. There is also a couple Reds in the background but I can’t be sure if they were of the same player. 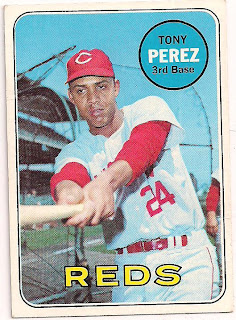 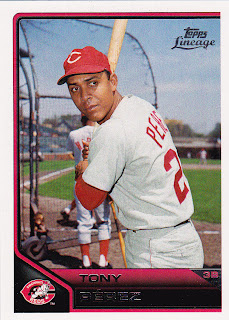 The cards are shot from a slightly different angles. I still glad that they used the photo that they did for the 1969 set. This lineage photo though is good for second place.
Posted by John Bateman at 9:58 AM