As I mentioned in my last post about a list of best ball teams, if Bill Stein would have been on the all ugly team then Milt Wilcox would have been on the all good looking team. Milt here looking like a young John Tesh is giving the classic pitcher pose to the cameraman. This is a definite spring training shot because it looks like there is a palm just left of his glove. 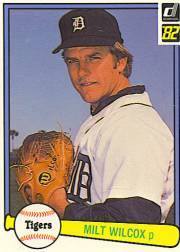 Back Facts: was originally signed by Cincinnati where he played for Sparky Anderson for parts of two seasons.
Posted by John Bateman at 4:57 AM