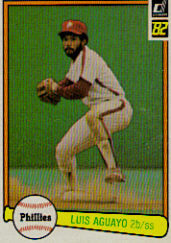 One of the great action shots in the Donruss 1982 set and probably one of the best in the early 1980s in any baseball set. This photo has a definite 3-dimensional feel to it as Luis body seems to protrude from the solid green background on the outfield fence a Veterans Staduim. It almost looks like his body was photoshopped into the picture. You have him ready to make a throw with one foot in the air as a small clamp of dust surrounds his feet. This photo does seem odd for the fact as to what exactly cause the dust bowl at his feet, could it have been a windy day and also the photo does appear to be missing the guy who should be sliding into second as it appears Luis is touching the bag for the first out of a doubleplay. However it is just a great shot of a solo player in action.

Back Facts: Phillies like him in utility role.
Posted by John Bateman at 5:06 AM