This is probably my favorite game 7 card baseball card. This is probably the last year Topps tried to make great playoff and World Series cards (by game) -  They stopped after 1974 and they tried to do it in 2005 and 2006 to so success but they now pretty much ignore the World Series game cards. 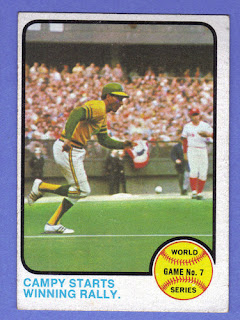 What I love about this card is Campy running up the baseline and you can see the ball, the security guards along the foul line and the World Series banner. Just an awesome peek into the past.
Posted by John Bateman at 3:14 PM